My Greatest Purpose - and Yours 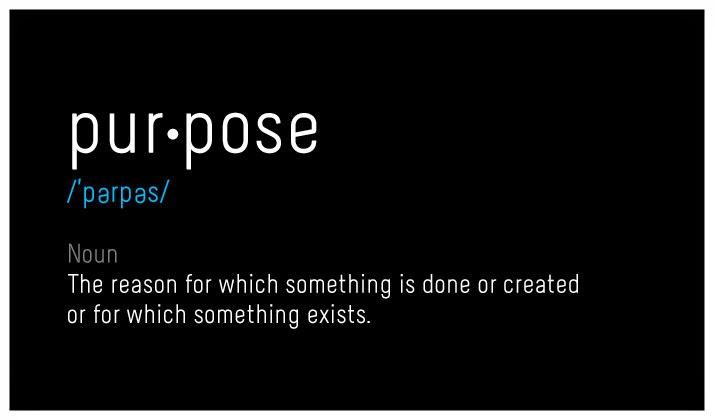 I had been teetering on the brink of feeling utterly lost and completely joyless. But then a few weeks ago, my pastor began his Sunday sermon by asking the question, "What if the fulfillment you are looking for is found in your relationship with your neighbors?" He reminded us that the greatest commandment in all of Scripture is to love - love God and love others - and that when we choose to give love we enter into God's divine infrastructure where we are loved in return.

As I listened to the message, I felt things inside me begin to shift. What if I stopped looking to the future and started focusing on loving people today, right where I am? What if that would give me the sense of purpose I was looking for?

So, I walked out of church that day with a new mindset and a new plan: I would do at least one small act of love for another person each day. On Monday, I shared a recipe with one of my neighbors. On Tuesday, I emailed a friend and told him all the things I appreciate about him. Now I am on week five of intentionally loving my neighbors, and it's amazing -  as simple as these acts of love are, they have given me an incredible sense of purpose. I wake up each morning with butterflies of anticipation, wondering who God has planned for me to love that day.

Today I feel my hope, my joy, my sense of fulfillment being restored. I haven't given up on my dreams - maybe someday I will have children, or an awesome career. But either way, I know that I have discovered my very greatest purpose: to love.
Posted by Unknown at 10:56 AM No comments:
Email ThisBlogThis!Share to TwitterShare to FacebookShare to Pinterest

Was God's Call on My Life Just a Pocket Dial?

Don’t you hate it when you get pocket dialed? It’s kind of a bummer when you think you’re getting a call from a friend only to hear her garbled voice as she is grocery shopping or driving carpool. In some instances the calls are more than an inconvenience - they are downright dangerous: in New York City, a full 38% of calls to 911 are pocket dials, clogging up the emergency response system. Then again, sometimes these unintentional calls are a blessing in disguise, like the time two thieves who had just robbed a Target in Madison, Wisconsin accidentally pocket dialed the police as they were bragging about their crime, and were promptly apprehended.

Have you ever felt pocket dialed by God? I mean, have you ever felt called by God to do something but then felt so overwhelmed by what He was asking you to do that you thought He must have called you by mistake?

I sure have. I remember arriving at seminary and thinking, Ok, I’m in way over my head! Maybe I’m not supposed to be here after all! Even some of the great men of the Bible felt like God had called them by mistake:


Sometimes God asks us to do something that seems totally beyond our ability. But, in truth, that’s the very nature of a calling – it is not something that can be done in our own strength, but a God-sized task that requires us to step out in faith. The fact that it’s bigger than us means there is room for God to show up and dazzle us with His power in amazing and unexpected ways.

Fall is often the time when we begin new assignments, so perhaps today you are finding yourself wrestling with a new calling. Right about now you may be thinking, “Yikes! Why did I agree to lead that Bible study? Or serve on that board? Or go to college so far away?” What at one time seemed so clearly to be God’s will may now be keeping you up at night, making you feel totally overwhelmed.

In a crazy way, your fear may be the confirmation that you heard God’s call correctly. You may just be bumping up against the fact that this is a God-sized task you have been given. And if this is true, then He will give you everything you need to complete it as you trust in Him. This is exactly what Paul meant when he wrote, “[God’s] power is made perfect in weakness.” (2 Cor. 12:9)

Don’t back down. Don’t give up. Trust that God called you! He never pocket dials.