I had a cool God experience this week.

On Tuesday night, Rob and I went out to dinner at one of our favorite Mexican food restaurants. As the waiter seated us, my eyes fell upon a man and woman sitting in a booth across the room.

I need to tell that man that Jesus loves him, I thought to myself. I dismissed the thought as quickly as it came, assuming it was just my own stream of consciousness. I looked at my menu, munched on chips, and chatted with Rob. But then, there it was again…

Tell that man that Jesus loves him.

Throughout the meal, the thought kept returning to me stronger and stronger until, finally, it dawned on me what was happening: the “thought” was actually the leading of the Holy Spirit. And He was asking me to speak to this man!

But as I sat there eating my nachos and mulling it over I came to one, overarching conclusion: God was asking me to take a step of faith and I needed to be obedient. After all, “faith” means you don’t know what the outcome will be. “Faith” means that you do it even though you’re scared.

So, I shared all of this with Rob, and together we came up with a plan. We decided to break the ice by paying for their meal. So, Rob instructed the waiter to bring him the couple’s bill. After a few minutes the couple finished eating, got up from their table, and walked past us toward the exit.

“Excuse me,” I said. They paused and looked at me. “I wanted to let you know that we were the ones that paid for your meal. And I want to tell you why we did…”

“Oh, thank you!” they both exclaimed at the same time.

I turned my attention to the man and said, “Sir, this has never happened to me before, but I really felt strongly that I should tell you that Jesus loves you.” I went on to explain a little more about the love of Jesus, and that we had bought his meal as a demonstration of that love.

The man listened intently, and then with a big smile and eyes glistening he shook our hands and thanked us. The woman gave me a huge hug and said, “This means so much. You have no idea what you’ve done. He really needed to hear that.”

I will never know what impact those words had on this man. Maybe he just got a terrible diagnosis, or lost his job, or was depressed. Or maybe he was just wondering if Jesus was real. All I know is that it was absolutely thrilling to step out in faith in order to be used by God in another’s life. I can’t wait to do it again.

Posted by Unknown at 9:30 AM No comments:
Email ThisBlogThis!Share to TwitterShare to FacebookShare to Pinterest

A few days ago Rob and I were watching TV and just happened to catch the performance of a new R&B artist named Mali Music. As I listened to him sing his breakout hit, "Beautiful," I was totally moved. I felt my spirit soar -- like I was sitting in church or something. Rob must have also felt it because, just as I was about to comment, he said, "This guy has got to be a believer. It just seems like he's worshipping."

So I did a little research and discovered that sure enough, Mali Music is a gospel artist that has recently crossed over to secular music. And he has absolutely exploded onto the R&B scene. He has joined the ranks of other Christian artists like Lecrae, Paramore, and Switchfoot in choosing to take the gospel beyond the confines of the Christian music genre to a secular audience.

So, this week's blog is short and sweet. I love "Beautiful" and wanted to share it with you. I hope it causes your spirit to soar, too.

Posted by Unknown at 2:35 PM No comments:
Email ThisBlogThis!Share to TwitterShare to FacebookShare to Pinterest

On Monday we will once again commemorate the most famous Irishman who ever lived. No, I’m not talking about Bono, although I would be in full support of having a day dedicated to him. I am speaking of the man we venerate by drinking green beer and pinching each other: Saint Patrick. 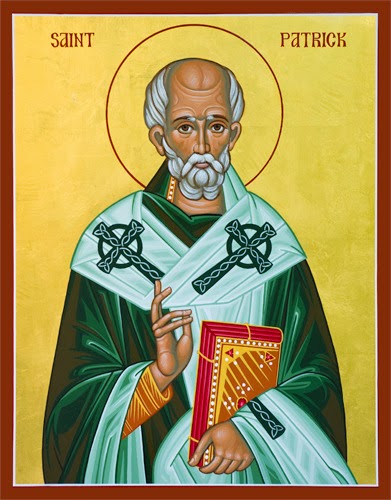 Folklore about Patrick abounds. One legend says he chased all the snakes out of Ireland. Another says his walking stick magically grew into a living tree. But, I think the truth about him is even more interesting.

Patrick was born in 387 AD in Britain. At the tender age of 16 he was kidnapped by pirates, taken to Ireland, and forced into slavery as a shepherd by the cruel king Miliucc. For six long years he wandered the Irish hills, utterly alone.

In his loneliness, Patrick began to call out to God. There was no one else to whom he could turn. As Patrick spent his days and nights in prayer, his loneliness lifted and in its place settled an assurance of God’s presence with him. Over time he developed an extraordinarily close relationship with God and a rock solid faith.

Eventually, Patrick was able to escape Miliucc’s grasp and make his way home to Britain. But this is not the end of the story. Incredibly, a few years later Patrick made the brave decision to go back to Ireland to evangelize the very people who had enslaved him. He became a missionary, traveling throughout Ireland and sharing the gospel wherever he went. The Irish people warmly welcomed him, eagerly receiving the good news of Christ. He was so well-loved that, upon his death, the nation made him their patron saint.

Patrick discovered his calling in a very interesting way: through being exiled. He had to live for a time in a state of forced absence from his country, his home, and his family in order to get to know God better. The Bible is full of similar stories of the exiled: Abraham followed God’s call into a strange new land. Both Moses and John the Baptist lived alone in the wilderness for years. David and Elijah had to hide out in caves because their lives were in danger. With each of these men, as with Patrick, God used the pain and loneliness of exile to draw them to Himself and develop spiritual maturity.

Perhaps today you are finding yourself in a place of personal “exile.” Maybe you are newly divorced, or jobless, or away from the family that you love. Or maybe your exile is more internal – a sense of emptiness or lack of purpose. Could it be that God has allowed this time in order to draw you closer to Him? Maybe God is busy doing a deep work in you to prepare you for your calling and, when it is over, you will have an exciting new sense of purpose and emerge ready to make your mark on the world -- just as Patrick did.
Posted by Unknown at 6:05 PM No comments:
Email ThisBlogThis!Share to TwitterShare to FacebookShare to Pinterest

Meet the Millennials. Born between 1981 and 2000, the Millennial generation is the most recent to hit adulthood, and make up one third of all Americans.

The most technologically literate generation yet, Millennials practically emerged from the womb texting on their mobile devices. They tend to be liberal in their politics, skeptical of institutions, and global in their worldview. On top of all this, Millennials have a strong need that can be summed up in one word: authenticity. They’re not interested in slick, airbrushed, or “new and improved.” They want real. They want organic. They want genuine. Whatever it is, they need it to be authentic.

In fact, the American church is experiencing what author Dave Kinnaman calls a “dropout phenomenon” among an entire generation of people in their 20s and 30s. Studies indicate that the majority rarely or never attend church. So is the American church teetering on the brink of irrelevancy? The situation is actually better than it appears.

In an interview with the Christian Post this week, Passion founder Louie Giglio said that many young Americans are hungry for the gospel. “They may be leaving a more traditional church,” he said, “but I don't think they're walking completely away from Jesus. I think a lot of students right now, young people are walking toward Jesus.” (He said some other good stuff, too…Read the full interview here.)

I was so pleased to read Giglio’s words, because they described my own experience with Millennials. It seems to me that many are searching for spiritual depth and intimacy with the person of Jesus. There is a desire to experience God’s power and presence, and these things seem to be lacking in their local church. In its place are what they perceive to be shallow programs and slick productions that run counter to the raw authenticity that Millennials crave. In a recent article, “Why Millennials Are Leaving the Church,” CNN blogger (and Christian Millennial) Rachel Held Evans wrote, “We’re not leaving the church because we don’t find the cool factor there; we’re leaving the church because we don’t find Jesus there...We want to be challenged to live lives of holiness.”  Likewise, in a recent survey conducted by Kinnaman, literally millions of young adults answered that they agreed with the statement, “God seems missing from my experience of church.”

Perhaps Millennials’ innate drive for authenticity is a God-ordained instrument designed to help the church return to the authentic roots of the Christian faith, including greater intimacy with God that combines Biblical truth with the power and presence of God. And the plot thickens as we take a look at where we are in history: every 500 years, the church goes through a massive reformation, and we are right on schedule for the next one!

Could it be that Millennials are actually the revolutionaries of our age, those who God is raising up to be the next reformation generation? Time will tell, but I believe they are.